Statler and Waldorf are a pair of elderly man puppets from the iconic Muppets franchise. They are best known for pulling foul-mouthed and negative jokes while standing in a theater balcony. 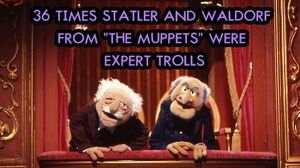 36 Times Statler And Waldorf From "The Muppets" Were Expert Trolls
Add a photo to this gallery
Retrieved from "https://great-characters.fandom.com/wiki/Statler_and_Waldorf?oldid=14178"
Community content is available under CC-BY-SA unless otherwise noted.