Tiana is the protagonist of Disney's 2009 animated feature film, The Princess and the Frog. She is a gifted cook living in New Orleansduring the Jazz Age, with the dream of opening and owning a restaurant of her own.

Tiana is the ninth official Disney Princess and the last to originate from a traditionally-animated feature, until Anastasia became part of Disney's library as part of their acquisition of 20th Century Fox. 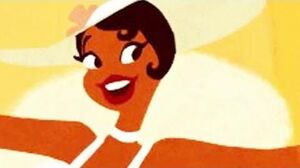 Princess and the Frog - Almost There - Disney Sing-Along
Community content is available under CC-BY-SA unless otherwise noted.
Advertisement