Ted Lewis (Kirby: Right Back at Ya!)

Kenichi Ogata (Kirby: Right Back at Ya!)

Being possessed, mind-controlled, brainwashed, manipulated, and/or used like a puppet

"As a “King Dedede” type, your sense of responsibility is stronger than that of most people, and you firmly believe you can do anything as long as you try hard enough. Adding to that, being trusted by others often brings you great joy and gets you motivated. Since you also have determination, you’re good at putting together a team and acting as its leader. While you are thoughtful and considerate, you’re also the type to not directly show your emotions and affection to others. You might want to try expressing your honest feelings to another person some time." ― Kirby Personality Quiz when King Dedede is the result (translated by kaialone) • Kirby Portal

King Dedede is a former antagonist and a current main protagonist in the Kirby series. He's the gluttonous and carefree self-made King of Dream Land and Kirby's most recurring rival. While he debuted as a villain, he has gradually shifted into one of the main protagonists of the series, and is almost always involved with the plot of whatever game he's in. 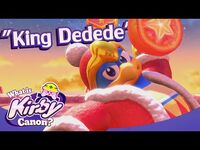 King Dedede - What is Kirby Canon? 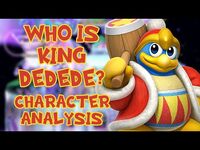 A HISTORY OF KING DEDEDE! A Kirby Series Character Analysis 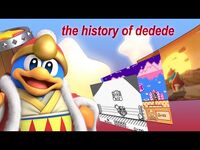 The History of King Dedede- Self-Proclaimed to Self-Made
Community content is available under CC-BY-SA unless otherwise noted.
Advertisement