Charlie Brown (called Chuck by Peppermint Patty and sometimes referred to as Charles by Marcie) is a major character in the Peanuts comic strip by Charles M. Schulz. 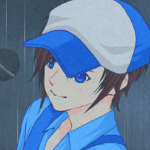