Captain Jack Sparrow is the main protagonist of the Pirates of the Caribbean movie franchise. He’s a pirate and a sea adventurier who’s potrayed by Johnny Depp. 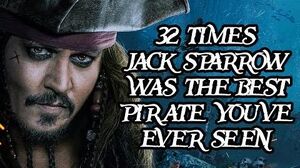 32 Times Jack Sparrow Was The Best Pirate You've Ever Seen
Add a photo to this gallery
Retrieved from "https://great-characters.fandom.com/wiki/Captain_Jack_Sparrow?oldid=14678"
Community content is available under CC-BY-SA unless otherwise noted.