Boyfriend is the protagonist of Friday Night Funkin'. He is on a mission to gain approval to date his Girlfriend , but must sing-off against her evil ex-rockstar father Daddy Dearest as well as the many other characters that stand in his way.

Boyfriend is a light-skinned teenage boy with cyan hair. He wears a white t-shirt with a red prohibition sign on it, blue baggy pants, red sneakers and a backwards red and blue cap. He holds a microphone in his right hand while keeping his left hand in his pocket.

During Week 6, his regular appearance is rendered in a 32-bit style.

During the last track of Week 7, he holds Girlfriend up by the waist with his left hand. 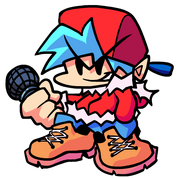 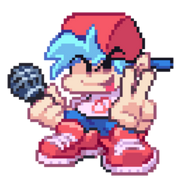 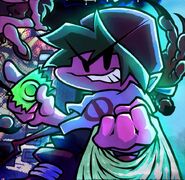 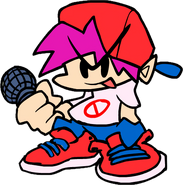